As an exercise, I decided to try modeling the 8441 B-model (racer) in SR 3D Builder. I am getting the hang of this program, and quite enjoyed putting together the rear end of the vehicle. I'm pleased to report that SR3D allowed me to model the front end, thanks to the hinge mode and the connection solver.

The software did make a boo-boo during an early attempt: the connection finder positioned one of the pieces into another one. Of course that was easily undone, and a different strategy solved the connection.

Posted by Bob The Squirrel at 7:13 PM No comments:

Posted by Bob The Squirrel at 7:16 AM No comments: 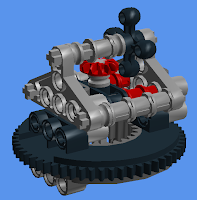 Hooray for Lego CAD software! Here's what I used:
And here are the build instructions for my latest iteration of a syncro drive part: 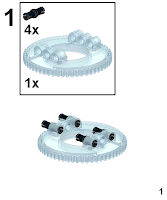 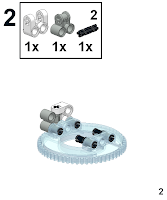 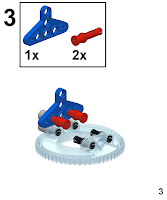 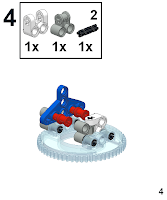 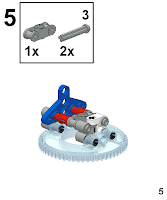 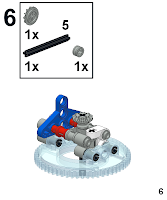 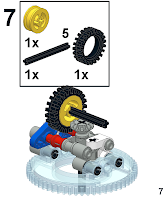 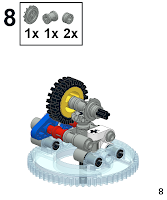 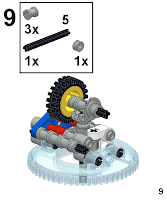 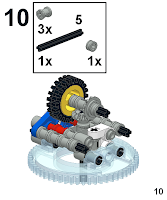 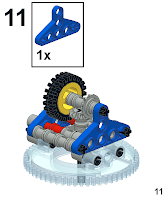 Posted by Bob The Squirrel at 2:15 PM No comments: 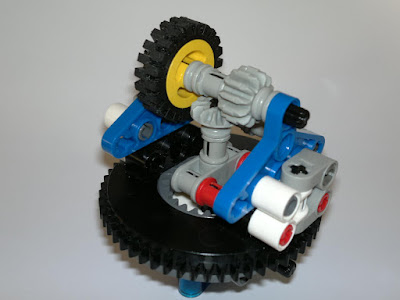 I recently noticed that one of the low-beams in my 2005 Impreza had blown out. Upon closer inspection, both marker lights were gone too. Since the marker lights are incredibly difficult to access and since the plastic lenses have gotten cloudy, I decided to remove both headlights and work on them inside the house.

Removing the headlights was surprisingly straightforward, thanks to the instructions in the owner's manual and to these instructions on NASIOC. I just followed steps 1 through 8, and I had both headlights in the house in 30-45 minutes.

It was a balmy 5 degrees Celcius outside with little to no wind, so I was able to work in short sleeves. To combat the early onset of darkness, I used a Petzl 3-led headlamp and had on a small AAA necklight.

Both low beams got replaced by Sylvania XTRAVISION H1 XVs that I got from Crappy Tire for $29 per pair. The marker lights were 168LL (long life) jobbies from GE I think. Both got replaced as well, even though the left side marker light came back to life when I banged on the headlight. That worries me slightly. What worries me more is the right side marker light was just hanging outside the lamp assembly in its socket, like it hadn't been inserted properly the previous time. The light bulb was burnt out and cracked, which means it probably died due to exposure to rain or oil. That bulb was last changed at the dealership, but iirc, they didn't charge me for it.

The low beams are protected in the back by a large round plastic cover that was hard to twist off. The gasket had gotten dried, so I lubricated it with dielectric grease before reinstalling the covers. I also put a dab of dielectric grease on the plugs. Hope that wasn't the wrong thing to do...

To polish the lenses, I used Meguiare's PlastX. I hadn't done any research before I went shopping, so it was a toss up between that and RainX's version. The stuff works pretty good, and quickly. The finish on the lens feels like car wax. No surprise there, considering what Meguiar's is famous for. My lenses still have pits from stones and whatnot, though. To get a factory finish I'd probably have to break out the wet-dry sandpaper, which I didn't care to get into.

Reinstalling the headlights went quickly -- maybe 15 minutes. Again, the Petzl came in handy. All in all, I'm really pleased I decided to tackle the project tonight instead of waiting until the weekend. It went faster than I had feared it might, and now I have working lights up front again.

Next project: replace the dead bulb(s) in my instrument cluster.

Update: subjectively speaking, the work has been worth it. There seems to be more light coming out of the headlights. The colour temperature has not changed noticeably, which makes sense because the XVs are supposed to have a colour temperature of 3200K versus the stock 3100K. It's impossible to pin down which change made the biggest difference since I didn't do any controlled testing and I changed 3 (or possibly more) things in one go (cleaned lenses, replaced a broken low beam, replaced both low beams with new bulbs).

Also, I gave my console a friendly thump on the drive to work, and the dead light came back on. Who knew the Subie had so much in common with an Amiga 500?

Posted by Bob The Squirrel at 7:35 PM No comments: